A Harvard ’04 weighs in on “The Social Network”

How true to life is “The Social Network”?  For what it’s worth, a friend of mine (Harvard ’04) weighs in.

I finally got around to watching the Social Network. I’ve been asked by a few people to make commentary on what was true and false in the movie…Here we go, to the best of my ability: 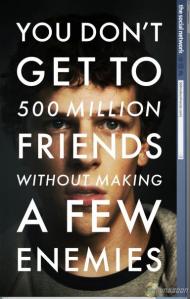 1. The Premise: Wanting to get into a Final Club. While there was a certain prestige associated with being a member, you could easily just not be in this scene. I can’t really speak to whether he was obsessed, but it seems a bit tenuous given that the Final Club scene wasn’t a make or break social dealbreaker. But if he thought it was, then he really was a loser!
2. Final Clubs: This could be a whole article in itself.
– “Punching”: this term is correct and I do recall that it involves getting letters under your door
– The scene where there is a guy manning the outside directing the coach bus was actually filmed at the entrance of the Spee Club. The Spee was known to be one of the most open-minded of the clubs. They allowed girls in the front door (not the servants entrance, woot!) and there were no restricted floors for men only.
– Girls arriving on coach buses: I’ve never seen this happen. Nor was there any need to bus girls over for parties. Coach buses were used for punch events out of Boston though. I’ve seen some shady stuff go down inside some clubs, but I don’t think the alumni would allow continual bussing of girls over from another school, once they got wind of it. I was actually one of the few people allowed inside the club the Spee after the alumni banned even their members from entering for 2 months after a “Chinese New Year” party went out of control (I needed to use their Steinway). By out of control, they meant, too many non members were allowed inside. Sadly, it was a rare moment of a club opening itself up but not to be continued.
– Girls were required at punch events. Bringing a good date was important. My friend brought Natalie Portman, for example. I was also there but clearly not nearly as impressive of a date! Tatyana Ali was also there, doing coke.
– Entrance to this club (and any of the clubs) for parties depended on who you knew, which you had to state when the door was opened. This was then verified by that person, who was inside waiting for you.
– Girls could throw parties at the Final Clubs if they knew people in them. I did this at the Fly for the afterparty of a show I produced–it really had nothing to do with being cool or not–it was just if you knew members and asked them nicely.
– The interiors of the clubs ranged from sweet to ghetto. The Spee had a Steinway piano and a real stuffed bear, which went up in flames by accident during a party.
– The Phoenix (which Eduardo Saverin was in) was the club with the most minorities. Punching is based on who you know, so the part about the “diversity punch” is probably just a fabrication.
– The bike room in the Porcelian is true…nobody except members could go past the bike room. The bike room is frankly not that cool and my guess is that the inside is not that much fun, unless there was lots of gay loving going on inside. But either way, this is the most mystical of the clubs because nobody knew what it looked like inside.
– The scene with all the girls stripping, playing poker…I never saw this but some of it was done a bit tongue and cheek.  It’s not really “real” though. Like I said, stuff went down in these clubs but they were typical drunken moments that weren’t different from a fraternity except the requirement to keep the place spic and span.
3. Kirkland House: where Mark lived. This is where I lived too. The interior, exterior and hallways don’t look anything like the movie. Ours was much nicer (but I’m biased). It had the charm of the old New England houses with the crooked, narrow staircases. The dining hall was the only one in Harvard to not have the dark wood paneling–it was light and airy.
4. The Winklevoss Twins: They looked even more annoying in real life.
5. Divya, the Indian sidekick to the twins: Looked even more douchy in real life. I knew with him from freshman year, he was nice but clearly thought highly of himself. This was the casting that was the most off I think.
6. The Facebook Offices: I went to visit in 2007. The movie did a pretty good job of mimicing the feel of the office, but the ceilings were not nearly as high (or the office so large & fancy). There was a cool start-up vibe in the office and I went to their Friday happy hour, where they were discussing installing the first servers for Europe (in Ireland). They also captured in the movie how the desks were put together in quads or so, on wheels. So if there was a new project that needed to be done, they would just wheel themselves into their new project groups! I thought this was the best idea ever.
That’s really all that I am qualified to talk about. Unlike the rumor I spread, I was not the girl who lit Eduardo’s bed on fire and texted him 47 times but I’m a little upset that Harvard classmates thought it could be true!!
Now I should stop procrastinating and do my schoolwork.

This entry was posted in Uncategorized and tagged Facebook, fun. Bookmark the permalink.